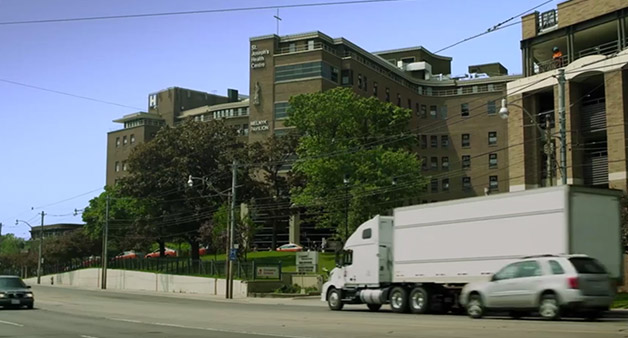 Not to be outdone by the stream of high-gloss Super Bowl commercials set to air in a few weeks, the Ontario Trucking Association will be delivering to television screens and social media channels its own positive message about the trucking industry and truck drivers.

“This is the most significant television and social media campaign we have ever launched,” said OTA president David Bradley. “It’s a great story to tell.”

The high quality TV spot celebrates truck drivers and raises public awareness around the invaluable contributions they provide as the lifeblood of our nation’s economy as well as their place in Canada’s social fabric. It will begin airing today on CP24 during the breakfast and nightly news cycles. Next Monday, the ad will debut on CHCH’s Evening News, Access Hollywood  and 60 Minutes, among other shows; as well as Sportsnet, City TV and Outdoor Life Network (OLN) during various episodes of Two and a Half Men, City News, Tim & Sid and Storage Wars Canada, just to name a few regularly scheduled programs in the broadcast rotation. The campaign will run for four to eight weeks, depending on the network.

“Most people see trucks and truck drivers every day, but what do they really know about them?” says Marco Beghetto, OTA’s vice president of communications and media. “Often overlooked is the industry’s extraordinary level of professionalism and safety; diversity and sustainability. This ad is a tip of the hat to all the professional men and women of our industry who live and work in all of our communities.”

The ad’s message is simple: Through the dedication of truck drivers, the trucking industry keeps this great country moving. It is a leader in employing new environmental and transportation safety innovations. It plays an unheralded, but critical role in people’s lives, communities and the institutions Canadians value most. And most importantly, truck drivers aren’t nameless, faceless operators of large vehicles you see on the highway.

As the narrator states: “We are fathers. And Mothers. We are your neighbours. We work where you work. And we’re proud to share the road with you.”

The TV spot  –  as well as an expanded two minute version – also hit social media forums like Twitter, YouTube and will be featured on OTA’s homepage, ontruck.org.  Carriers and other businesses that appreciate this message are encouraged to share the video and upload it to their own websites and social media accounts.